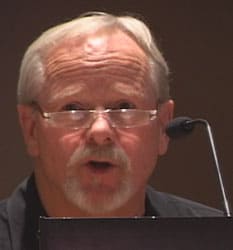 Allan Buckman is the President and co-founder of Microbetech, a Nevada-based bioremediation company. A former wildlife biologist and environmental scientist with the California Department of Fish & Game, Allan’s 38-year career has given him crucial insight into environmental stress and the decline of ecosystems.

In Allan’s presentation at the 60th Annual DPI/NGO Conference at the United Nations (New York) in 2007, he spoke about the role of pollution in an ever-increasing plant death problem related to the “persistent jet clouds” we now associate with stratospheric aerosol geoengineering operations (chemtrail spraying) and discussed a biorestoration alternative. In his speech, Allan corroborates the data presented in What In The World Are They Spraying?, saying:

The fallout contains aluminum, strontium, radium, boron, and many more metals, all of which have been documented in every drinking water supply in California and Arizona since about 1987. They only way that could happen is from air application, but no explanations are available.

The time for skepticism is over: whatever their purpose, these operations are destroying the planet. Tune in as Allan discusses the impact of aerosol geoengineering on all life.