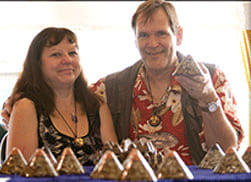 The late Dr. Wilhelm Reich – an Austrian psychoanalyst, inventor, pioneer, and the author of several influential books and essays – discovered orgone energy and coined the term “orgone” in 1939. He is best-known for his controversial book The Function of the Orgasm. Wilhelm Reich’s discoveries so confounded the powers that be that they illegally jailed him. His books were burned to prevent his knowledge and its potential applications from reaching the public.

But good things always resurface. Although people or agencies may stand in the way, good cannot be stopped. its rainmaking time is committed to bringing our listeners useful tools and solutions to enable them to accomplish the things that are most important to them.

Years ago, its rainmaking time interviewed Trevor James Constable and learned how he used orgone energy to create rain, disperse clouds, and eliminate smog. As 2013 comes to an end, we’ve invited husband-and-wife team Carol and Don Croft to the show. They are the founders of the Etheric Warriors forum and World Without Parasites.

Carol (a gifted psychic) and Don Croft are working to relieve the physical misery caused by massive technological growth and abuse. Carol and her husband Don make beautiful orgone energy products (aka orgonite) for all occasions and environments. Their mission is to use orgone energy to transmute toxic land and sea environments into thriving ecosystems where all living things can enjoy good health and prosperity.

In this segment, Carol and Don Croft discuss their book The Life Etheric and explain why dolphins and whales follow them when they travel near water. We also talk about aerosol spraying, microwave towers, and advanced technologies on land and under the sea. These challenging subjects demand deep exploration to understand how to improve conditions for all life on Earth. Whether or not you agree with the science and paradigm of orgone energy, this segment is worth a listen.