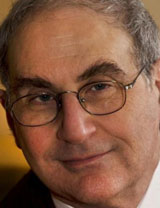 Dr. Lawrence Solomon shares a totally different perspective on the subject of climate change in his new book, the Amazon bestseller The Deniers: The World-Renowned Scientists Who Stood Up Against Global Warming Hysteria, Political Persecution and Fraud (And those who are too fearful to do so).

Dr. Lawrence Solomon is a founder and managing director of Energy Probe Research Foundation and the executive director of Energy Probe. He was instrumental in the founding of the World Rainforest Movement, Friends of the Earth Canada, and Lake Ontario Waterkeeper. Dr. Lawrence Solomon’s 1996 model for the satellite tolling of roads has been adopted throughout the European Union. He holds patents for toll road technology for the EU, China, Singapore, Hong Kong, Mexico, and Brazil.

In this multifaceted segment, we discuss scientific consensus, what it means to be a “denier”, simulations, peer review, carbon dioxide, Al Gore and his mentor Professor Roger Revelle, and the climate of fear that permeates climate science. Join us as we delve deeper into the science and politics of climate change with Dr. Lawrence Solomon.