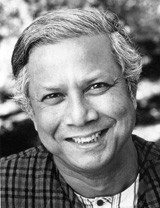 Microlending, microfinance, and microcredit were invented to eliminate poverty and usher in industry all over the world in developing nations. When this interview was produced, Dr. Muhammad Yunus, the founder of The Grameen Bank, was not yet a Nobel Peace Prize Winner. He finally got the recognition that he deserved for over 25 years in December 2006. Dr. Yunus founded the only bank in the world that lends money to the rural poor without collateral. Due to global central banking paradigm and its stronghold on banking throughout the world, someone had to introduce a different paradigm with new processes and protocols that connected in with the human heart. This is one of the most rare and revolutionary organizations in the history of humankind!

Dr. Muhammad Yunus is also the founder of the Grameen Foundation and the author of Banker to the Poor: Micro-lending and the Battle Against World Poverty, and Creating A World Without Poverty: Social Business and the Future of Capitalism.

The evidence is clear that banking can be based on trust, good faith, positive expectation, humanity, wisdom, connectedness and practicality. We now know that “creditworthiness” has always been a farce to keep billions of people out of the credit opportunity. “Creditworthiness” never required collateral. Collateral should have never been necessary for banking.

Join us for this blockbuster interview and meet Dr. Muhammad Yunus, one of the most kindhearted leaders and businessmen in human history!