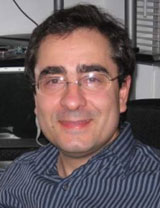 Dr. Nicola Scafetta is an Assistant Adjunct Professor at Duke University, a co-investigator at the Active Cavity Radiometer Irradiance Monitor Lab, and the author of many peer-reviewed research papers. He is also the author of several books on climate change and other scientific topics, including Climate Change Reconsidered: The Report of the Nongovernmental International Panel on Climate Change, Climate Change and Its Causes: A Discussion About Some Key Issues, Disrupted Networks: From Physics to Climate Change, and Fractal & Diffusion Entropy Analysis of Time Series: Theory, concepts, applications and computer codes for studying fractal noises and Levy walk signals.

Dr. Nicola Scafetta offers invaluable insight into the way climate change is studied within the framework of the anthropogenic global warming (AGW) theory, and explains how the actual data tells us a very different story. He details the ways in which the sun contributes to both warming and cooling climate cycles, and makes it clear that it has always been this way. Furthermore, he explains why computer modeling doesn’t work, and why climate modeling predictions are so far off the mark. This interview will leave you with an understanding of the complexity involved in measuring climate, the problems inherent in computer modeling, and the role of the sun in climate.