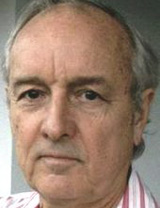 Perhaps the most graphically disturbing piece of information in the climate arena is the assertion that sea levels will rise to a catastrophic degree. An Inconvenient Truth scared many people, and the sea level issue continues to worry them. The imagery from the movie is still etched in our minds and hearts. Imagery is powerful even if it is untrue. It lingers in the subconscious mind, where it can affect our ability to think critically and receive whole-systems information. We must be vigilant to prevent this.

In this show, Dr. Nils Axel Morner clarifies many misconceptions about rising sea levels and offers a comprehensive understanding of this subject. Dr Mörner is highly qualified to speak on the matter. He was the former President of International Union for Quaternary Research (INQUA). Under his charge, when INQUA Commission on Sea Level Changes and Coastal Evolution, after deliberations and discussions at several international meetings, declared a possible sea level change of +5 cm ±15cm by the year 2100, it was based on a huge amount of world-wide data gathered by scientists from different parts of the globe.

Dr. Nils Axel Morner got his Ph.D in geology in 1969, and has worked with sea level problems for 40 years in areas scattered all over the globe. As the head of Paleogeophysics & Geodynamics at Stockholm University, he worked with many different geological & geophysical problems. He organized two major international conferences: one on Earth Rheology, Isostasy and Eustasy in 1977 and one on Climate Changes on a Yearly to Millennial Basis in 1983. He has run several international field excursions through Sweedon and was President of the INQUA Commission on Neotectonics (1981-1989). He was President of INQUA Commission on Sea Level Changes and Coastal Evolution from 1999-2003.

He headed the INTAS Project on Geomagnetism and Climate (1997-2003). In 2000, he launched an international sea level research project in the Maldives. Among his numerous publications, one may note the studies on: the interaction among isostasy and eustasy, the oscillating regional eustatic curve of NW Europe, the changing geoid concept, the redefinition of the concept of eustasy, the dynamic-rotational redistribution of oceanic water masses, the interchange of angular momentum between the hydrosphere and solid Earth, and finally the new sea level curve of the Maldives with an absence of signs of any on-going sea level rise.

In 2008 he was awarded The Golden Condrite of Merit from University of Algarve (at an international sea level meeting in Portugal).

Dr. Nils Axel Morner’s extensive hands-on experience and 40 years of mindful focus bring valuable context to the climate change debate. Is the IPCC giving us an accurate picture? Tune in and find out!

Previous post: Lorelle VanFossen – What You Need To Know About Blogging