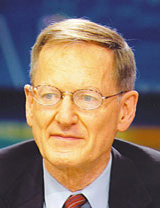 George Gilder is a man of many skills, gifts and insights. He is the Chairman of George Gilder Fund Management, LLC and host of the Gilder Telecosm Forum. He is also a Senior Fellow at the Discovery Institute, where he directs Discovery’s program on high technology and public policy; the former Editor-in-Chief of the Gilder Technology Report (published by Forbes Inc., 1996-2007); and a practicing venture capitalist. George Gilder has authored 15 books including Microcosm, selected by Wired as the second most important technology book of the era, and the international bestseller Wealth & Poverty. National Review felt that Wealth & Poverty was one of the most important works of the twentieth century.

George Gilder is a contributing writer for Forbes and Wired, and recently came out with a new book called The Israel Test. George Gilder is passionate about everything he talks about, and he processes information as fast as the new up-and-coming graphics computer that he and his partners are coming out with in 2011.

Special thanks to The Luxe Hotel on Sunset Blvd. in Los Angeles, California, who were kind enough to provide a suite for this interview.