Hugh Newman – Reconnecting Us To Our Ancestors 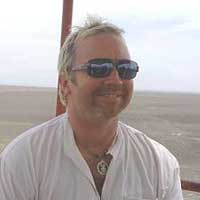 Hugh Newman, the founder of the yearly Megalithomania Conference, is passionate about reconnecting us to the earth and our ancestors. He is an avid antiquarian, writer, explorer, international lecturer, and researcher of earth mysteries and esoteric sciences. You may have seen Hugh Newman on the popular History Channel series Ancient Aliens in Series 3 and 4, BBC TV, or Sky Channel 200. He has lectured at conferences in the United Kingdom, Malta, France, Peru, Egypt, Bosnia and North America.

Hugh Newman is the author of the book Earth Grids: The Secret Patterns of Gaia’s Sacred Sites, as well as The Psychic Children: Dolphins, DNA, and the Planetary Grid. He is currently writing a book about the Wandlebury Fort complex, an enigmatic mound site near Cambridge, United Kingdom. Hugh’s articles have been featured in publications all over the world, including The Leyhunter, Mindscape Magazine, World Explorer Magazine, The Circular, The Spiral, The Heretic, and New Dawn (Australia).

Hugh Newman is a frequent presenter at festivals and workshops and leads ancient tours to sacred sites across the globe. In this interview, Hugh shares fascinating treasures about our ancient past, megaliths, giants, and the fact that Giza (not Grenwich) is the real prime meridian.

Next post: Shaun Kirwan – The Spirit of The Land Matters