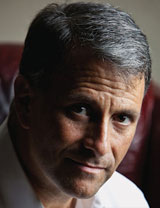 We like to think our Congress represents us – but does it? When they first arrive on Capitol Hill, new Congresspeople are immediately sought out and mentored by lobbyists. With over 20,000 lobbyists in Washington D.C., the role of lobbying in U.S. politics is a critical key for understanding how our government works. This segment explores lobbying and the systemic issues that can stem from it. Jack Abramoff – former lobbyist, convicted felon, and the author of Capitol Punishment – joins us with an insider’s perspective on the political processes that corrode truth, leadership, and the ethical representation of “We The People”. Jack Abramoff offers a rare and candid glimpse into the complex political realities surrounding legislation – how it’s drafted, voted in, killed, and largely unread by our representatives – and a deeper understanding of Congressional hearings, political immunity for insider trading, lobbying-related conflicts of interest, and high-level bribery.

In order to change our political system, we have to understand it first. Join us as Jack Abramoff, Washington D.C.’s most notorious former lobbyist, shares his insights into how it works – and what we can do to reform it.