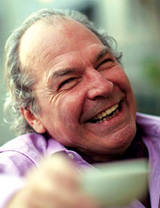 Better to be deprived of food for three days than tea for one.
~Ancient Chinese proverb

While coffee remains the most popular beverage in the United States, many consumers have shown an increased interest in tea as both a coffee replacement and a beneficial component of one’s diet. But no matter how insightful the research may be, few things are as compelling as an educated testimonial. Join us as we speak to the prophet of tea about the magic in these little leaves. James Norwood Pratt just might make you a believer.