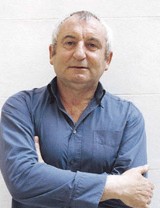 Homelessness is one of civilization’s greatest tragedies. John Bird became homeless at age 5. His youth was divided between prison and homelessness on the streets of London. Then, in 1991, he and The Body Shop co-founder Gordon Roddick launched The Big Issue, a weekly entertainment and current affairs magazine distributed by the homeless.

The Big Issue Foundation was founded in 1995 to provide aid and rehabilitation services to the homeless community. If you long for a story of triumph over tragedy, this interview with John Bird is not to be missed.