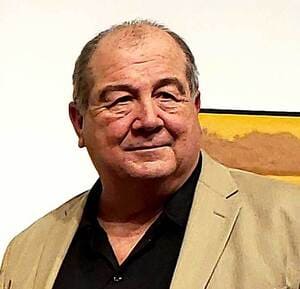 John Oberdorf has been painting surreal landscape art since he was a young man living in Oregon. Art News calls him “a student of ancient civilizations.” Brentwood Magazine calls his work “magical”. John Oberdorf is a true artist in every aspect of the word. His timeless art calls him to venture out on scientific and artistic expeditions into the southwest to seek clues to ancient civilizations and the mysteries of the ages. Join us as we introduce an ancient soul who opens windows into other dimensions through his initiatory art.

“My paintings manifest in a somewhat different form of what may be called Surrealism. They have taken shape in varying approaches to the arid landscape or landform that becomes a stage for symbols even as it is a symbol in itself; an enigma suspended in time. Evidence of human interaction with the land is part of this experience. I have gradually been drawn to another view of the surreal which reveals it to be much closer to the physical world and our understanding of what we interpret as real. The distance between dream and reality, the conscious and unconscious is not great and there are different levels of perception, which fade from one into another. The nature of surrealism unfolds in an experience of uncommon perception; a sudden occurrence in the psyche that gives rise to images and visions. My particular obsession with the past, both human and geological. I instinctively produce the images that evolve from a relentless interest. I paint not only for joy or by design, but from compulsion; the need to know things that remain mysterious or unanswerable. One cannot really explain that need and it is best that this is so. Perhaps there is a kind of answer in that realization. Ultimately, the questions a viewer asks are far more important than any answer I could give.” ~John Oberdorf