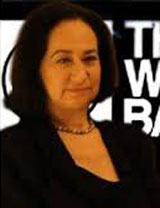 Karen Hudes worked as Senior Counsel for over 21 years at The World Bank. When she brought her concerns over the corrupt takeover of the Philippines’ second largest bank to the attention of The World Bank’s authorities, she was fired.

Karen Hudes has an interesting role to play in life; it’s a role that has no title. Her passion is holding others accountable to the rule of law. She declares victory amidst a world marketplace and economy that is off the tracks. She takes authority where she has no official title, approaching corruption as if it is undoable.

Karen Hudes has made many radio and television appearances over the years in an effort to bring to light her experiences at The World Bank and inform the public about what is happening within The World Bank’s highest level chain of command. She shares the inner workings of The World Bank and offers unusual information from an insider’s point-of-view. Hot on the heels of her recent book The Public Bank Solution, Ellen Brown (Web of Debt) also joins us with questions and discussion points. This segment takes an unusual turn, so buckle your seatbelts and enjoy the show!