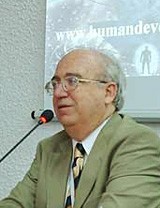 Author Michael Cremo made waves in 1993 when he and Richard Thompson wrote the blockbuster book Forbidden Archaeology, an investigation into extreme human antiquity. He has just completed The Forbidden Archaeologist, a collection of his articles from Atlantis Rising magazine. Michael Cremo’s assertion that humankind has existed on Earth for billions of years places him in a totally different paradigm than the scientific establishment.

Michael Cremo asserts that the modern archaeologist and paleontologist communities have suppressed fossil evidence on the basis of confirmation bias. Michael Cremo explores the mystery of humanity’s origins with a refreshing enthusiasm. Journey with us beyond history for a deeper look into humankind’s past.