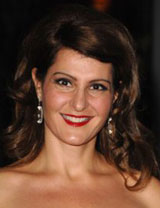 Nia Vardalos is a rare jewel in the entertainment industry; a kind of salt of the earth, a magical presence with a passion for all that is real and good. She’s funny, tenacious, and warm-hearted. She’s known for writing and starring in the blockbuster hit My Big Fat Greek Wedding. She also starred in I Hate Valentine’s Day, My Life In Ruins, and Larry Crowne, which she co-wrote with Tom Hanks. Recently, she opened the door to her very private world and released a new book called Instant Mom.

After 10 years of trying to have her own child with her husband Ian, she finally became open to adopting. She learned so much in the process that it will spin your heads. With only 14 hours notice, Nia met her daughter Ilaria. Years of heartache, struggle, suffering, and what appeared to be God’s will for her NOT to have a child disappeared in an instant. When we don’t get what we want after many years of trying to make something happen, it can elude and perplex even the most wise. Many people give up right before their big breakthrough.

If you’ve ever felt as if your heart was the key to your happiness and fulfillment, you will feel as if this treasure Nia Vardalos offers up is for you.