Richard Fine – The Bravest Man in the Legal Field 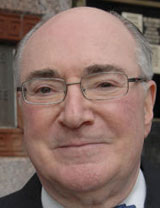 This is the most explosive series of Judicial & L.A. County Corruption and discoveries in the State of California aside from the Comprehensive Annual Financial Reports. If you dare to listen to this, you better be sitting down.

International attorney Richard Fine, formerly with the Justice Department, was disbarred and put in solitary confinement for 18 months when he stood up to the judicial system in California for bribery and corruption. He discovered that the County of Los Angeles, some of its supervisors, and many of its judges were accepting illegal payments in addition to their salaries that violated the law, ethics, and the trust of the people of California. The State Bar of California has supported, empowered, and conspired to protect the same judges, and anyone who accepted bribes and money – including the County of Los Angeles itself, which withheld millions of dollars of child support that were paid, but never delivered to the women and children they were to go to. In order to protect everyone for corruption charges and misdeeds and violating the public trust, they moved to disbar him and Judge Jaffe ordered that Mr. Richard Fine be placed in coercive solitary confinement for 18 months to force him to pay for attorney and client charges for a case he never represented.

The level of conflicts of interest, corruption, criminality, and financial misconduct is staggering. Not only did this happen, but the same people who did this got together and created a new statute giving all involved parties complete and total retroactive immunity for corruption, bribery, and violation of the California Constitution.

If they can conspire to do this to the honorable Richard Fine, who dared to call them all on it and take a stand to stop it, can you imagine what they can do to everyone else in the courtrooms of California? If you live in California and use California Courts and don’t make it your business that this go viral, CAVEAT EMPTOR.