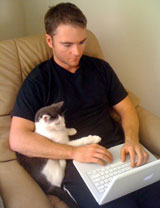 It’s a sad fact that most of us don’t know what it means to eat healthy. And how could we? As respected institutions the world over release conflicting studies on weight loss, nutrition, and diet, it’s becoming clear that the low-fat, heart-healthy approach has put us on the losing side of the battle of the bulge. But a new high-fat, high-protein diet called the “Paleo Diet” or “Caveman Diet” may hold the key to a tighter belt – and amazing breakthroughs in strength training and athletic endurance. Former research biochemist Robb Wolf, the author of the New York Times bestseller The Paleo Solution: The Original Human Diet, guides us through the paleo diet’s fascinating high-fat nutritional paradigm, which is based on grass-fed meat, wild-caught fish, and organic ingredients. Robb is the host of The Paleo Solution Podcast, the co-founder of The Performance Menu, a nutrition and athletic training journal, and the co-owner of NorCal Strength and Conditioning (one of the top 30 gyms in America) and paleo diet food company Paleo Brands Inc. He is also a former California State Powerlifting Champion who coaches athletes at the highest levels of competition. Join us with Robb Wolf as we take a deeper look into the Paleo Diet and its implications for established nutritional wisdom.