Shaun Kirwan – The Spirit of The Land Matters 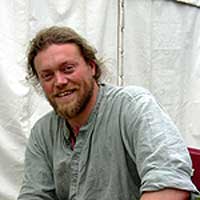 Is there really a spirit of the land? Many people want to know. If you were to ask Shaun Kirwin, he would say there most definitely is. Shaun Kirwan is best known a geomancer, dowser, and teacher in Glastonbury, England. He describes himself as a Georepairman. Drawing on his western Geomancy training and background in Shamanism and Buddhism, he has developed intuitive techniques for earth healing and creating sacred space.

A geomancer can be called upon to identify energetic patterns in the land. If necessary, they can also fix energetic problems that affect a region or site negatively. Shaun Kirwan describes these energetic problems as trauma. They may be related to geopathic stress, water underground, ancestral spirits, or residual energy from events that may have occurred there. These can be incredibly detrimental to nearby communities, manifesting as violence or disease – even greed and political corruption.

Geomancy (“divining of the earth or land”) is a lost science of antiquity. Some refer to it as an expression of Sacred Geometry. It has been used in some way by every ancient culture – Chinese, Indian, Tibetan, Celtic, German, etc. – to build spiritual or religious structures all over the world. These include the megalithic sites local to Glastonbury (Glastonbury Tor and Glastonbury Abbey), the enigmatic Stonehenge and other stone circles, the Egyptian and South American pyramids, and ancient temples everywhere.

Native Americans have a saying that when they go to a site, they beautify it, thereby showing respect to the land. Shaun Kirwan explains the risks involved in disrespecting the land, and why we should ask the land’s permission before building on it. Join us for a fascinating exploration of the world of geomancy that touches on ley lines, dragon lines, energy grids, the hierarchy of spirits, and dowsing as a means of spirit communication and conscious relationship with the environment.

Previous post: Hugh Newman – Reconnecting Us To Our Ancestors