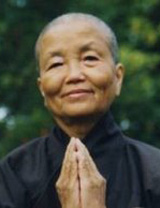 Sister Chan Khong is the rock behind one of the greatest teachers on this planet – Thich Nhat Hanh – who has been working for peace for over sixty years. He is the founder of Plum Village in France, where people gather from all over the world to learn the art and practice of mindfulness. Thich Nhat Hanh was nominated for the Nobel Peace Prize by Dr. Martin Luther King, Jr., who was very impressed with his work.

Sister Chan Khong supports Thich Nhat Hanh in bringing forth the teachings of mindfulness, receptivity, healing, and true listening. She ushers in timeless wisdom, tools, and teachings for peace. Without her, he would never be able to achieve such a large scope of work. On September 11, 2004, I had the privilege of talking with her at Plum Village, where she shared her inspiring perspectives on transmuting hate, war, discord, and suffering. If you are interested in manifesting peace in everyday life, Sister Chan Khong and Thich Nhat Hanh offer an extraordinary and practical framework.

Peace is crowning as a human and global imperative for the prosperity of civilization. Join us with Sister Chan Khong as we unveil the next step for humankind with this remarkable teacher.