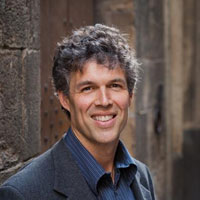 Since his 2007 article “Slippery Business” in The New Yorker, freelance writer Tom Mueller has become the world’s de facto expert on olive oil. He is the author of Extra Virginity – The Sublime and Scandalous World of Olive Oil (2012) and the blog Truth in Olive Oil, which picks up where the book left off. In his work, Tom Mueller strives to understand the remarkable complexity of the olive oil trade – and to express his concerns about low-grade oils being passed off as “extra virgin” all over the world.

For thousands of years, olive oil has been recognized in the Mediterranean and beyond as an extraordinary medicine, a beauty aid, and a vital element of religious practice. In Extra Virginity, Tom Mueller highlights the immense value of olive oil, the skill and heritage of its artisan producers, and the incredible craftsmanship involved in creating high-quality products. He also brings to light the reality of olive oil fraud: an indictment of the food industry’s lax protections against fake and sometimes toxic food products in the United States. Extra Virginity pays homage to the producers, chemical analysts, chefs, and food activists defending the extraordinary oils that truly deserve the name “extra-virgin.”

On Truth in Olive Oil, Tom Mueller strives to answer questions raised by the book, advise consumers about buying and using olive oil, and call attention to producers of fraudulent oils. His aim is to create a grass-roots movement of olive oil fanatics, inspiring a revolution in consumer awareness similar to the movements that have developed around microbrew beers, artisanal cheeses and chocolates, fine wines, tea, and coffee.

Join us with Tom Mueller as we take a deeper look at the culture, industries, and controversy surrounding olive oil. We’ll also be discussing Fresh Squeezed – Tom’s upcoming documentary film about the worldwide olive oil revolution.