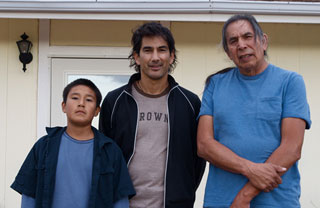 Randy Vasquez (center) and Walter Littlemoon (right) with Manuel Yellow Horse (left), who plays Walter as a child in The Thick, Dark Fog

However nobly and courageously we characterize our country, America’s claim to the values of liberty and justice is tarnished by a history of incredible social inequality and cultural oppression. Most Americans are familiar with the dishonor that marked our forefathers’ dealings with the Native Americans – but Lakota Sioux native Walter Littlemoon knows from personal experience that it continued well into the 20th century. Forced into a government boarding school on the Pine Ridge Indian Reservation at age 5, Walter Littlemoon was one of over 100,000 Native American children subjected to unbelievable violence and abuse in the name of assimilation. His desire to become a better father led Walter Littlemoon to defragment and overcome his traumatic past, inspiring his autobiography They Called Me Uncivilized: The Memoir of an Everyday Lakota Man. Producer/director Randy Vasquez documents Walter Littlemoon’s tale of heartbreak and healing in the upcoming film The Thick Dark Fog. Join us as Walter Littlemoon and Randy Vasquez guide us through a terrible period in Native American history to the light they found at the end of the tunnel.